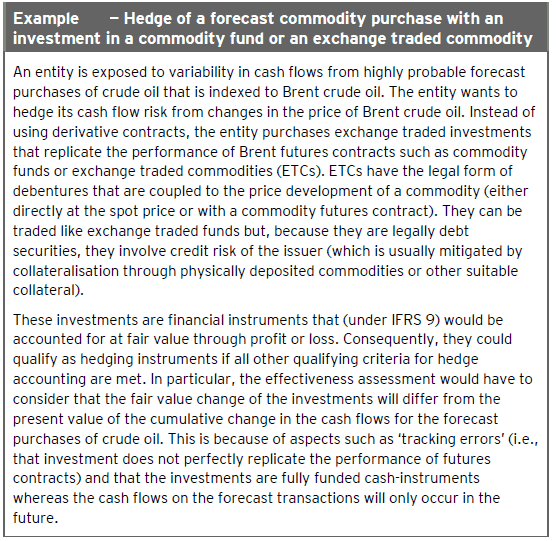 This clarifies that an entity cannot designate a ‘partial-term’ component of a financial instrument as the hedging instrument, but only the entire instrument for its remaining life (notwithstanding that an entity may exclude from designation the time value of an option, the forward element of a forward contract or the foreign currency basis spread, see ‘Time value of options‘ and ‘Forward element of forward contracts and foreign currency basis spread of financial instruments‘ ).

However, when measuring ineffectiveness, the foreign currency revaluation of the forecast sales would have to be discounted, whereas the hedging instrument (i.e., the IAS 21-based foreign currency component of the financial liability) would not. This would result in some ineffectiveness (see ‘The effect of the time value of money‘).

Also unchanged from IAS 39, derivatives measured at fair value through profit or loss still qualify as hedging instruments. The sole exception to this rule continues to be written options, unless the written option is designated to offset a purchased option. This would also include hedges of purchased options embedded in another financial instrument.

The requirement that the hedging instrument has to be a contract with a party external to the reporting entity remains.

Something else -   Cash flow hedge of a net position

Something else -   Cash flow hedge