For the purpose of improved international accounting standards (IASs), the IASC issued exposure draft (ED 32) “The Comparability of Financial Statements” in January 1989. ED 32 proposed amendments to IAS 22 as well as other IASs. The draft defined goodwill as the difference between the cost of acquisition and the fair values of net identifiable assets acquired. The draft proposed that positive goodwill be recognized in the statement of financial position as ‘goodwill on consolidation’ and to be systematically amortized over its useful life.

The amortization period should not exceed five years unless it was justified but in all circumstances the maximum useful life not to exceed twenty years. The standard was revised in 1993 as part of the project on Comparability and Improvements of Financial Statements. It became (IAS 22(revised 1993)).

In June 1995, the IASC issued ED 50 ‘Intangible Assets’ for comments. Many submissions were received and reviewed. Subsequently, the IASC issued another draft ED 60 ‘Intangibles Assets’ in 1997 that amended ED 50. It recommended that acquired and internally generated intangibles, except internally generated goodwill, should be recognized at cost where expected benefits are probable and the cost of each asset can be measured reliably.

Intangible assets should be amortized over the best estimate of its useful life with a reputable presumption that the useful life will not exceed 20 years form the date when asset is available for use. If the amortization period exceeds 20 years, the evidence that rebuts the presumption is to be disclosed and such assets are to be subject to annual impairment test. Intangible Assets may be revalued to fair value only after a reference to an active secondary market is made. The credit on revaluation is to be transferred to a revaluation surplus. History of intangible assets 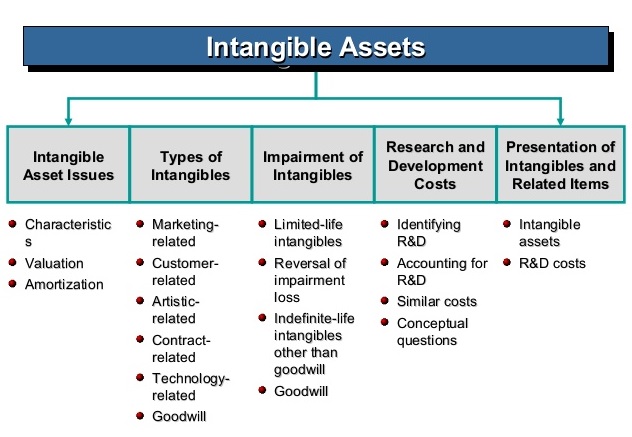 In September 1998, the IASC issued the IAS 38 ‘Intangible Assets’ that contains the principles for accounting for goodwill and identifiable intangibles. It was applicable to periods commencing from 1 July 1999. It applied to intangible assets that are not specifically dealt with in other International Accounting standards.

The IAS 38 replaced the IAS 9 ‘Research and Development costs’. Various paragraphs of the IAS 22 (revised 1993) were revised in 1998 to be consistent with IAS 36 ‘Impairment of Assets’, IAS 38 ‘Intangibles Assets and other International Standards and the treatment of negative goodwill was also revised by the recently restructured International Accounting Standards Board (IASB).

Intangible assets were at that moment defined in IAS 38 as ‘identifiable non-monetary assets without physical substance held for use in the production or supply of goods or services, for rental to others, or for administrative purposes’ (paragraph 2). The standard requires the recognition of acquired intangibles where it is probable that future economic benefits will flow to the enterprise and the cost can be measured reliably. They are initially recognized at cost as long as the cost can be reliably measured.

IAS 38 also specifically states that internally generated goodwill, brand names, mastheads, publishing titles and items similar in nature should not be recognized as assets. Subsequent to initial recognition of an intangible asset at cost, IAS 38 allows an intangible asset to be measured using either the benchmark or the allowed alternative treatment. The benchmark method requires intangibles to be carried at cost less any accumulated amortization and any accumulated impairment losses.

An impairment loss is the amount by which the carrying amount of assets is reduced by to reflect its recoverable amount. The allowed alternative method requires intangibles to be carried at a revalued amount, being its fair value at the date of the revaluation less any subsequent accumulated amortization and any subsequent accumulated impairment losses, provided the fair value can be reliably measured. The fair value of intangible assets can be measured reliably only if it is determined by reference to an active market. An active market exists if, and only if, all the following conditions are met:

However, both methods are restrained by the amortization and impairment requirements, along with the need to determine fair value in an active market in the allowed alternative method. In relation to the amortization of intangible assets, IAS 38 required intangible assets to be amortized over the best estimate of the asset’s useful life with the reputable presumption that the useful life not exceeds 20 years.

The standard allowed the amortization for a longer period that is more that 20 years, providing the extension is justified by persuasive evidence. It identifies such circumstance as rare.

The residual value of an intangible asset should be assumed to be zero but with two exceptional rare cases. A commitment to purchase by a third party or the existence of an active market for the asset at the end of the asset’s useful life.

Further information on accounting for goodwill and negative goodwill arising on acquisition is found in the International Accounting Standard IAS 22 (revised 1998) ‘Business Combinations’.

IAS 22 is consistent with what was proposed in the IAS 38, but it also requires IAS 36 “Impairment of Assets” to be applied to the carrying amount of goodwill. In particular, IAS 36 specifies indicators of impairment and requires goodwill to be written-down to its recoverable amount where that amount is less than goodwill’s carrying amount, but only when impairment is indicated. Recoverable amount is defined as the higher of net selling price and value in use.

In July 2001, the IASB identified the accounting for intangible assets (including goodwill) as a high priority. The International board has commenced a project on Business Combinations including purchased intangibles. This project re-examines all of the issues related to business combinations, including the recognition and measurement of acquired goodwill and intangible assets, and the amortization and impairment approaches.

For the short term, this project involves revising IAS 22 and may result in either the amendment of IAS 22 or the issuance of a new International Financial Reporting Standard (IFRS) with guidance to supplement IAS 22. Revisions to IAS 38 and IAS 36 were made as part of the first and second phase of its business combinations project in 2004. In March 2004, IFRS 3 “Business Combinations” was issued and superseded IAS 22 and becomes effective from January 1, 2005.

In 2008, IFRS 3 “Business Combinations” was reissued and is effective for annual reporting periods beginning on or after July 1, 2009.  IFRS 3 should be applied, when an entity acquires the net assets of another entity, by the acquirer. The consolidated financial statements should be prepared in accordance with IAS 27. IFRS 3 requires that the acquisition method should be applied to all business combinations.

Something else -   Popular to read - IFRS 9 Low credit risk

As stated by IFRS 3, the application of the acquisition method involves four steps: History of intangible assets

IFRS 3 defines the acquirer in a business combination as ‘the entity that obtains control of the acquiree in the business combination’. According to IAS 27 “Consolidated and separate Financial Statements”, control is defined as ‘the power to govern the financial and operating policies of an entity so as to obtain benefits from its activities’. The third step in applying the acquisition method involves recognizing and measuring the identifiable assets acquired, the liabilities assumed and any non-controlling interest in the acquiree. The fourth step is about recognizing and measuring the acquiree’s intangible assets including goodwill. History of intangible assets

Something else -   Expected attrition rate - How 2 best account it