The net investment hedge is one of three hedges defined in IFRS 9, the others are the fair value hedge and the cash flow hedge. 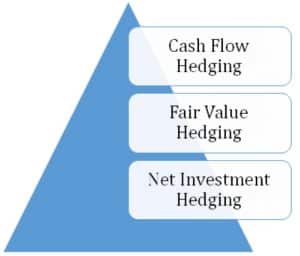 Hedge accounting can bring a number of advantages over traditional accounting methods. The core benefit is that by addressing the timings mismatch associated with standard derivative accounting, hedge accounting removes temporary volatility from the P&L. As a result, the financial statements will better reflect the company’s true economic performance.

Reducing the volatility in earnings results in a number of additional benefits:

But it can also go very wrong, see this article from Reuters: Dutch housing coop Vestia seeks damages from Deutsche Bank for derivatives.

The three types of hedging relationships in IFRS 9 Financial instruments – Hedge accounting are as follows:

Hedges of a net investment in a foreign operation

An overseas equity investment, i.e. a subsidiary, associate or joint venture is hedged by a derivative or non-derivative contract. The net investment in a foreign operation under IAS 21 The Effects of Changes in Foreign Exchange Rates, is the amount of the reporting entity’s interest in the net assets of the operation, including any recognised goodwill.

On consolidation, any foreign exchange gains or losses on retranslation of the net assets of the foreign operation are recognised in other comprehensive income. This type of hedge shall be accounted for similarly to cash flow hedges:

When the hedged item is disposed of, the cumulative gains or losses in other comprehensive income shall be recognised as part of the profit or loss on disposal.

Subsidiary D’s management predicts that it is highly probable that it will:

What can a hedge do?

Company W can hedge up to USD 80 million of its net investment in subsidiary D at the date of hedge designation. The USD80 million is represented by:

Subsidiary D’s forecast proﬁts (USD8 million) and forecast inter-company dividend payments (USD5 million) cannot be included in the hedged item, because they do not form part of company W’s existing net investment. The undeclared forecast inter-company dividend payments (USD5 million) do not qualify as hedged items, because they will not affect reported net proﬁt or loss. As the proﬁts are earned, they increase the net investment and can then be included in the hedged item. When dividends are paid, the amount covered in the net investment hedge might need to be reduced correspondingly.

Sub NZ issues yen-denominated notes. Parent is not permitted to designate the yen-denominated notes issued by Sub NZ as the hedging instrument in a hedge of its net investment in Sub J. This is because Sub NZ is not part of the operating unit that has the foreign currency exposure and Sub NZ has a functional currency different from that of the Parent.

Sub NZ issues yen-denominated notes and Parent designates those notes payable as the hedging instrument in its hedge of its net investment in Sub J.

On a consolidated basis, Parent translates Sub J’s financial statements from its functional currency into US dollars. Any foreign currency translation gains or losses are recorded in the equity component translation adjustment reserve through other comprehensive income. Net investment hedge

In its stand-alone financial statements, Sub NZ’s yen-denominated notes are remeasured at spot through earnings to its functional currency (the US dollar) at period-end because the hedging relationship and related hedge accounting exist only in the context of Parent’s consolidated financial statements. Net investment hedge

Annualreporting.info provides financial reporting narratives using IFRS keywords and terminology for free to students and others interested in financial reporting. The information provided on this website is for general information and educational purposes only and should not be used as a substitute for professional advice. Use at your own risk. Annualreporting.info is an independent website and it is not affiliated with, endorsed by, or in any other way associated with the IFRS Foundation. For official information concerning IFRS Standards, visit IFRS.org.