The essential difference between a recourse and non-recourse asset has to do with which assets a lender can claim against if a borrower fails to repay a loan. Many loans are taken out with some form of collateral, or assets of a certain value that the lender can take if the borrower does not pay the money back as outlined in the loan.

In both recourse and non-recourse loans, the lender is allowed to take possession of any assets that were used as collateral to secure the loan. In most cases, the collateral is the asset that was purchased by the loan. For example, in both recourse and non-recourse mortgages, the lender would be able to seize and sell the house to pay off the loan if the borrower defaults.

If a non-recourse provision exists in a loan, so a creditor’s claim is limited to specified assets, the bank is required to assess (that is, to ‘look through to’) the particular underlying assets or cash flows to determine whether the loan’s contractual cash flows are SPPI. If the loan’s terms give rise to any other cash flows, or if they limit the cash flows in a manner inconsistent with the SPPI criterion, the instrument will be measured in its entirety at FVTPL

If, for instance, a non-recourse loan of 100 is made to an SPV that only has equity shares initially worth 100 with which to repay the loan, as soon as the share price goes down, the loan will make a loss; therefore, in substance, the instrument is a put option on the shares, and not a loan, so it would fail SPPI. The key judgement is where the ‘tipping point’ is and how much risk is needed for an instrument to fail SPPI.

Something else -   Is the fair value option applied?

This may also be the case when a creditor’s claim is limited to specified assets of the debtor or to the cash flows from specified assets. However, the fact that a financial asset is non-recourse does not in itself mean that the SPPI test is not met.

Something else -   Asset-backed securities

An instrument would not fail to meet the SPPI test simply because it is ranked as being subordinate to other instruments issued by the same entity.

An instrument that is subordinated to other instruments may meet the SPPI test if the debtor’s non-payment is a breach of contract and the holder has a contractual right to unpaid amounts of principal and interest, even in the event of the debtor’s bankruptcy. [IFRS 9 B4.1.19]

It appears that, if the contractual payments due under a financial asset are contractually determined by the cash flows received on specified assets, then the financial asset generally cannot meet the SPPI test unless the criteria described in ‘Contractually linked instruments‘ are met. Here is the decision tree illustrating these criteria: 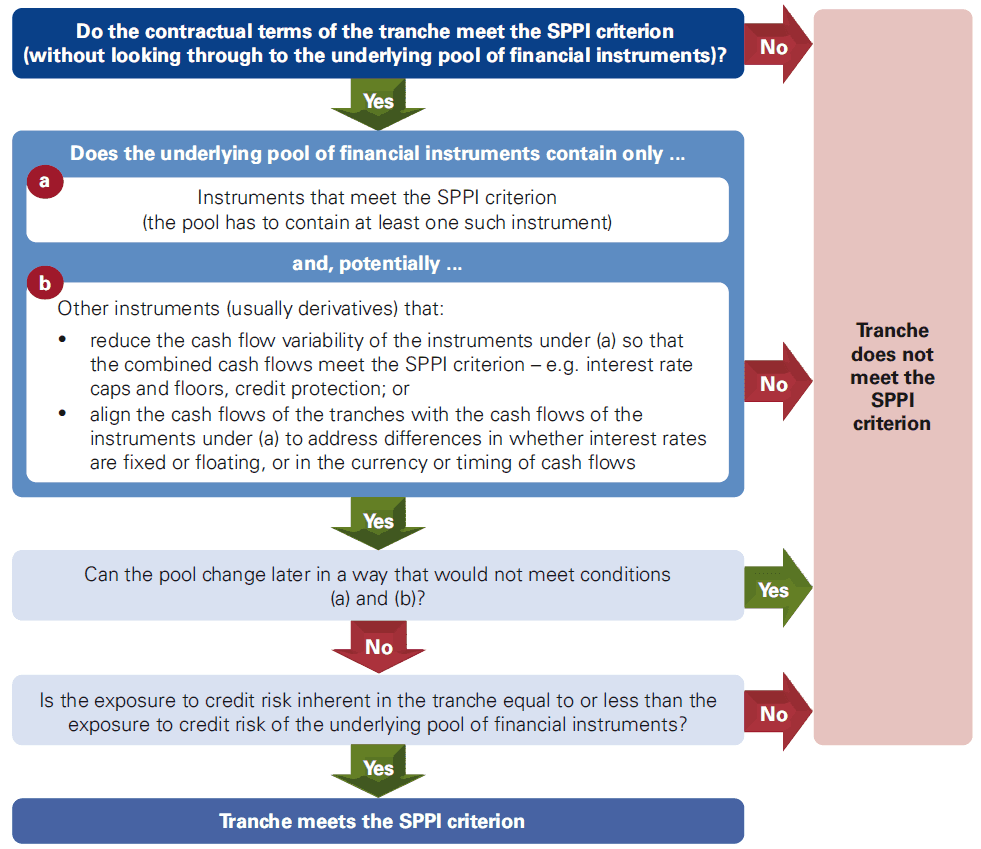 Question: What examples of non-recourse loans might be inconsistent with the SPPI criterion?

Examples of non-recourse loans that might be inconsistent with the SPPI criterion are:

There is limited guidance in IFRS 9 as to how the existence of a non-recourse feature might impact the SPPI criterion. Judgement will be needed to assess these types of lending relationship. Non-recourse assets

Something else -   IFRS 9 Financial asset classification

Interest received is determined upfront as floating rate plus a fixed margin (determined primarily based on the credit quality of the borrower), with no reference to the performance of the underlying asset. Non-recourse assets

Question: Would the loans provided by the bank meet the SPPI criterion?

Yes. Such a loan will meet the SPPI criterion, because the amount of cash flows due is not expected to vary with the asset’s performance, nor is the payment linked to asset risk. Non-recourse assets

Non-recourse to portfolio of equity instrument

A bank has provided a loan to a borrower with a fixed rate of interest and fixed maturity date. The loan is secured, on a non-recourse basis, on a portfolio of equity instruments (shares). The value of the shares approximates to the principal of the loan at inception. As such, at maturity of the loan, the borrower intends to sell the shares and to use the proceeds to repay the loan. The borrower would keep any upside in the share price, but the bank would suffer any loss. The pricing in this case is the same as a written put option on the shares. Non-recourse assets

Question: Would such a loan meet the SPPI criterion?

Something else -   IFRS 9 Financial asset classification