Skip to content
Topics hide
Principal versus agent considerations
Case – How to determine the principal?
Case – An annual re-appointment requirement as a substantive right
Case – Removal right with a one-year notice period requirement
Case – An intermediate holding company as an agent of its parent
Case – Employees as de facto agents
Case – Decision-maker remuneration at market rate

A principal may delegate some of its power over the investee to the agent, but the agent does not control the investee when it exercises that power on behalf of the principal (IFRS 10.B58).

Similarly, the magnitude and variability of the decision-maker’s exposure to returns from other interests in the investee may indicate that he is acting on his own behalf rather than on behalf of others (IFRS 10.B71-72). In summary: 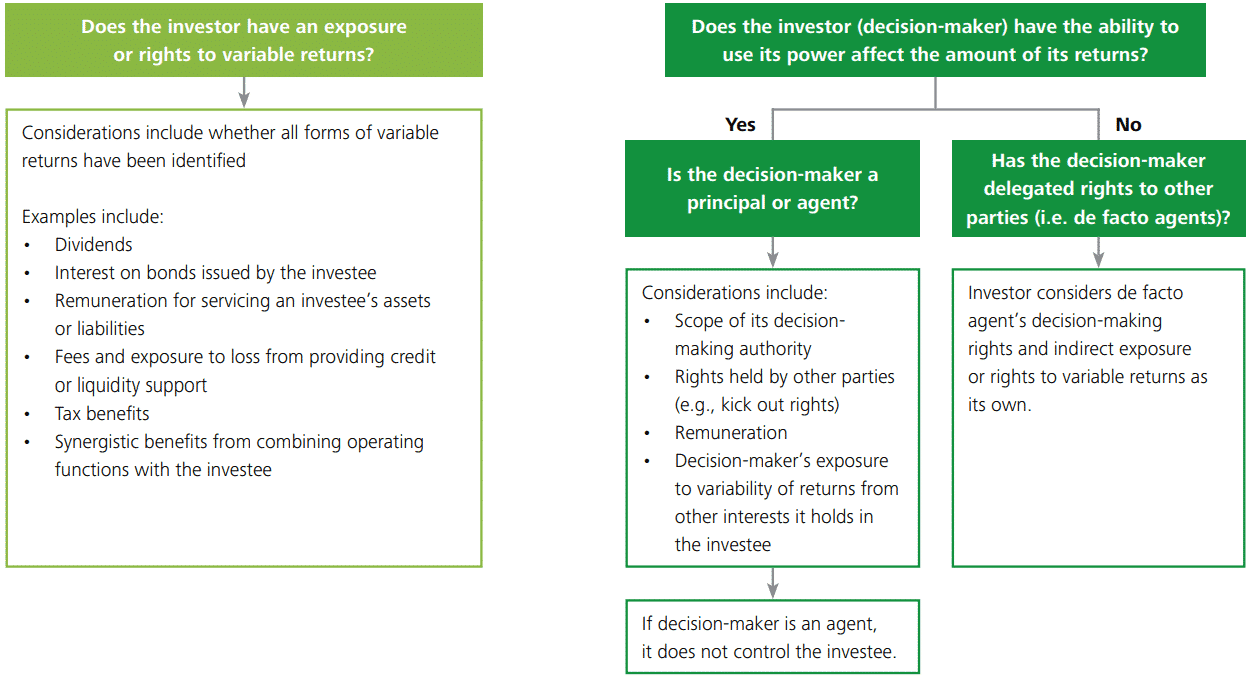 Case – How to determine the principal?

IFRS 10.B59 states “…In situations where there is more than one principal, each of the principals shall assess whether it has power over the investee by considering the requirements in paragraphs B5-B54…”.

A decision-maker (a fund manager) is determined to be an agent in relation to the fund it manages, in which there are multiple investors. What considerations should be looked to in determining which (if any) of the investors should consolidate the fund?

Investors A, B and C invest in 15%, 30%, and 55% respectively of a fund that is managed by an external fund manager. The fund manager has wide powers to make investment decisions, and the investors cannot direct or veto these decisions. The fund manager can be removed only by a unanimous vote from all three investors and has been assessed to be an agent under IFRS 10.

Should investors A, B or C attribute the fund manager’s decision powers to themselves when they each consider whether they have power over the fund?

An agent does not control an investee (IFRS 10.B58). The manager does not therefore control the fund. Rather it is primarily acting on behalf of the other investors (the principals).

However, although an agent “is a party primarily engaged to act on behalf of and for the benefit of another party or parties (the principal(s))”, this does not necessarily mean that any one of the principals controls the entity.

Where there are multiple principals, each principal should assess whether it has power over the investee by considering all the factors in the consolidation framework (IFRS 10.B59) − that is, power, exposure to variable returns and the ability to use power to affect returns.

Therefore, with regards to the example fact pattern, the investors should not attribute the fund manager’s decision powers to themselves. The fund manager is an agent for all three investors. As the agent acts for multiple principals, each of the principals must assess whether it has power (IFRS 10.B59).

None of the investors has the unilateral power to direct or remove the fund manager. Therefore, none of them on their own have the ability to direct the relevant activities of the fund (IFRS 10.B9).

Case – An annual re-appointment requirement as a substantive right

Substantive removal rights held by other parties may indicate that the decision-maker is an agent. Is a requirement to re- 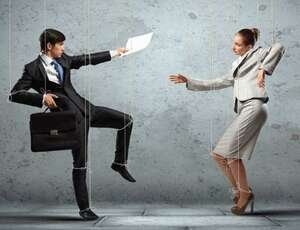 appoint the decision-maker on an annual basis an example of a substantive removal right?

The fund management service can be performed by other fund managers in the industry. Effectively, the annual appointment requirement provides the board with a mechanism to replace the fund manager if necessary.

Is the annual appointment requirement a substantive removal right?

Yes, this is likely to be a substantive removal right (IFRS 10 example 14C). The fund manager should consider the removal right along with other relevant factors, including its fees and other exposure to variable returns, in order to determine whether it is an agent.

Is the removal right substantive given that a one-year notice period is required?

No direct answer. The common view is that a positive appointment of an asset manager for a limited period (see above an annual re-appointment requirement as a substantive right) is different from an indefinite contract with a removal right exercisable with a notice period. The reappointment right creates a mechanism by which the asset manager’s performance is positively considered.

A removal right is only exercised from the point that the service is unsatisfactory. It may be assumed that where an asset manager is appointed for one year, its services will not be unsatisfactory on the first day of appointment. Our view is that a one-year re-appointment right is more likely to be substantive than a one-year notice period because the long notice period may provide a barrier to its exercise.

Something else -   Factoring without recourse

The guidance on substantive rights is relevant when considering notice periods. Questions that an asset manager should ask in assessing the impact of notice periods on the principal-agent determination include:

Case – An intermediate holding company as an agent of its parent

Holdco, a wholly-owned subsidiary of Parent, owns 100% of Opco, an operating company. The only business purpose of Holdco is to hold investments in Opco. Holdco issues listed debt and is required by local law to prepare consolidated financial statements where required by IFRS.

Is Holdco an agent or de facto agent of Parent (and therefore does not control Opco) if:

No. A decision-maker is an agent/de facto agent only when it has been delegated those decision-making powers by another party.

IFRS 10.B59 states: “An investor may delegate its decision-making authority to an agent on some specific issues or on all relevant activities. When assessing whether it controls an investee, the investor shall treat the decision-making rights delegated to its agent as held by the investor directly.”

Holdco controls Opco directly in all three scenarios, as it holds the shares in Opco, and Holdco’s management can dictate Opco’s policies through the voting power given by Opco’s shares. Regardless of the degree of Parent’s representation or control of Holdco’s governing body, the direct investment in Opco and power over Opco are both held by the corporate entity Holdco.

As power over Opco belongs, in the first place, to Holdco rather than Parent, Parent has not delegated any power to Holdco; Holdco is not therefore an agent of Parent. As Holdco is also exposed to variability of Opco’s returns, Holdco should consolidate Opco.

Entity X manages and has full decision-making authority over a fund. X grants performance-based awards to its KMP whereby they receive shares in the managed funds if certain conditions are met. X also requires that part of the KMP’s cash bonuses is invested directly in the funds. The KMP may also invest their own funds. X does not hold any direct interest in the fund.

As X does not have any direct interest in the fund (other than a management fee), this might suggest that X does not have significant exposure to variable returns. However, the KMP may in substance be holding their shares on behalf of X. The right of the KMP to invest in the funds may be a form of compensation and so provide indirect benefits to X.

This will impact both the exposure to variable returns criterion (IFRS 10.7b) and the principal-agent analysis (IFRS 10.7c, IFRS 10.B74) of control.

No direct answer. Judgement is required to assess whether:

Something else -   Refund liabilities

This judgement should be made based on facts and circumstances, for example,

If the KMP are de facto agents, their shareholdings will be attributed to X when deciding whether X should consolidate the fund.

A fund manager (‘FM’) is given wide investment powers over an equity fund that it manages. The fund manager 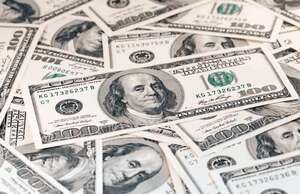 receives an annual fee of 2% of the net asset value of the fund, which is consistent with the fee structure of similar funds.

Can the fund manager conclude that it is an agent for fund investors and therefore does not control the fund, by virtue of the fact that it only receives market remuneration?

No, the fund manager cannot conclude that it is an agent on this basis alone.

The other factors in IFRS 10 must also be considered. For example, if the fund manager has a direct investment in the fund, that should be considered (IFRS 10.B71-72). The fund manager also needs to consider the magnitude and potential variability of its remuneration relative to the returns of the investee (IFRS 10.B68, IFRS10.B72).

An asset manager may choose to reduce its fee for relationship purposes if the returns of the fund are very low. This would preserve a return for the other investors and effectively increase the variability of the fund manager’s return. IFRS 10 examples 13 to 16 provide guidance on how to assess such exposure.

A fund manager is a principal if it accepts a fee structure that is not commensurate with the services provided and does not include only terms, conditions or amounts that are customarily present in arrangements for similar services and level of skills negotiated on an arm’s length basis (IFRS 10 B69).

However, the converse is not true − that is, the fact that remuneration is market-based is not sufficient to conclude that the fund manager is an agent (IFRS 10.B70). However, a manager with no direct interest in a fund that receives a market-based fee is likely to be an agent.

Something else -   Service or insurance contract?