Swaption – A swaption is an option granting its owner the right but not the obligation to enter into an underlying swap. On Wikipedia additional information is available: https://en.wikipedia.org/wiki/Swaption

The needs of the parties in a swap transaction are diametrically different. Swaps are not traded or listed on exchanges but they do have an Over-The-Counter (OTC) market and are traded among dealers.

Swaps can be effectively combined with other type of derivative instruments. For example: An option on a swap gives the party the right, but not the obligation to enter into a swap at a later date.

Swap can be classified as;

In commodity swaps, the cash flows to be exchanged are linked to commodity prices. Commodities are physical assets such as metals, energy, and agriculture.

For example: In a commodity swap, a party may agree to exchange cash flows linked to prices of oil for fixed cash flow.

A company that uses commodities as input may find its profits becoming very volatile if the commodity prices become volatile.

This is particularly so when the output prices may not change as frequently as the commodity prices change. In such cases, the company would enter into a swap whereby it receives payment linked to commodity prices and pays a fixed rate in exchange.

How do commodity swaps work

In a different scenario, if the price per barrel will have increased to CU 2,550/bbl than the pay-fixed party would have received a net inflow of CU 5,000,000. 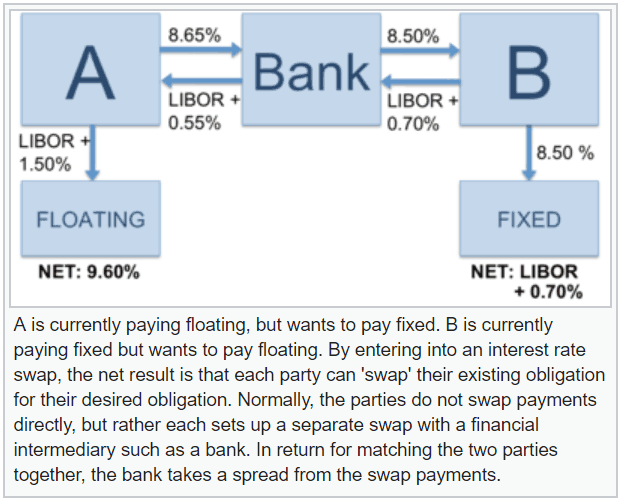 Currency swaps have always been very convenient in finance. They allow for the re-denomination of loans or other payments from one currency to the other.

For large corporations, currency swaps offer the unique opportunity of raising funds in one particular currency and making savings in another. The risk for performing currency swap deals is very minimal, and on top of that, currency swaps are very liquid, and parties can settle on an agreement at any time during the lifetime of a transaction.

Early termination of a currency swap deal is also possible through negotiation between the parties involved.

In the past, currency swaps were done to circumvent exchange controls, but nowadays, they are done as part of a hedging strategy against forex fluctuations. They are also used to reduce the interest rate exposure of the parties involved or to simply obtain cheaper debt.

For instance, let’s say a US-based company ‘A’ wishes to expand into the UK, and simultaneously, a UK-based company ‘B’ seeks to enter the US market. As international companies in their prospective markets, both companies are unlikely to be offered competitive loans.

UK banks may be willing to offer company A loans at 12%, while US banks can only offer company B loans at 13%. However, both companies could have competitive advantages on their domestic turfs where they could obtain loans at 8%.

In the case of different interest rates, both companies would have to work out a formula that reflects their representative credit obligation.

Another way to approach the swap would be for both company A and company B to issue bonds at underlying rates. They would then deliver the bonds to their swap bank, who will switch them over to each other.
Company A will have UK assets, while company B will have US assets. Interest from company A will go through the swap bank that will deliver this to company B, and vice versa.

Something else -   Foreign currency basis spreads

As well, each company will, at maturity, pay the principal amount to the swap bank, and in turn, they will receive the original principal.

In both scenarios, each company has obtained the foreign currency it desired, but at a cheaper rate while also protecting itself again forex risk.

A cross currency swap is an over the counter (OTC) derivative in the form of an agreement between two parties to exchange the interest payments and principal on loans denominated in two different currencies.

The payment of interest can be made at different rates, like either fixed or floating rates, both fixed or both floating and at different frequencies. They are driven by comparative advantage. At the initiating of the swap through an agreement, the counter parties exchange notional principals in two currencies of their choice.

During the life of the agreement, each party pays interest to the other in the currency exchanged.

In an equity swap, two parties agree to exchange a set of future cash flows periodically for s specified period of time. Once leg of the equity swap is pegged to a floating rate such as LIBOR or is set as a fixed rate. The cash flows on the other leg are linked to the returns from a stock or a stock index. The leg linked to the stock or the stock index is referred to as the equity leg of the swap.

Let’s take an example to understand the various aspects of an equity swap. Let’s say an asset manager who manages a fund called Alpha Fund follows a passive investment strategy and his portfolio tracks the S&P 500 Total Returns Index. The asset manager can enter into an equity swap contract with a counterparty say Goldman Sachs with the following terms:

Notional Principal: $100 million
Alpha Fund pays: Total returns on the S&P 500 Index
Goldman Sachs pays: Fixed 6%
Payments to be made at the end of every six months, that is, 30th June and 31st December
The swap has a maturity of 3 years. 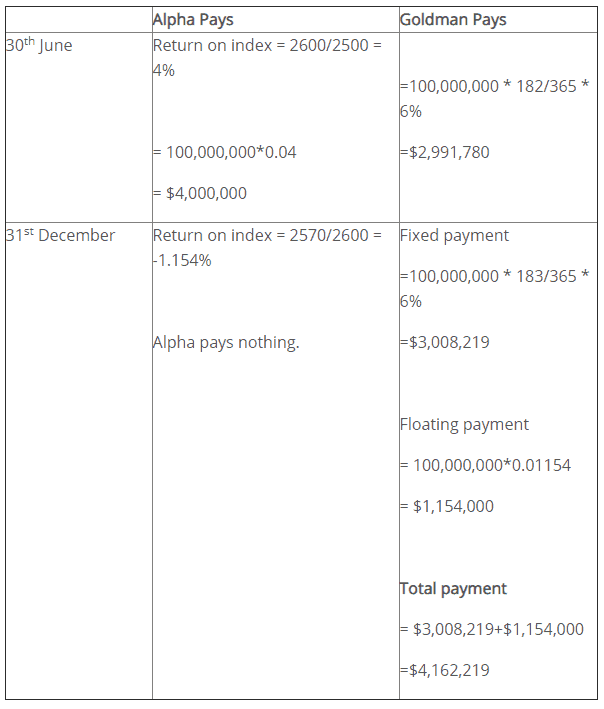 Let’s make a few observations from the above table:

A default swap is a bilateral contract that enables an investor to buy protection against the risk of default of an asset issued by a specified reference entity. Following a defined credit event, the buyer of protection receives a payment intended to compensate against the loss on the investment.

This is shown in Mechanics of a default Swap, below. In return, the protection buyer pays a fee. For short-dated transactions, this fee may be paid up front. More often, the fee is paid over the life of the transaction in the form of regular accruing cash flow. The contract is typically specified using the confirmation document and legal definitions produced by the International Swap and Derivatives Association (ISDA).

Despite the rapid moves toward the idea of a standard default swap contract, a default swap is still very much a negotiated contract. There are, therefore, several important features that need to be agreed between the counter parties and clearly defined in the contract documentation before a trade can be executed. 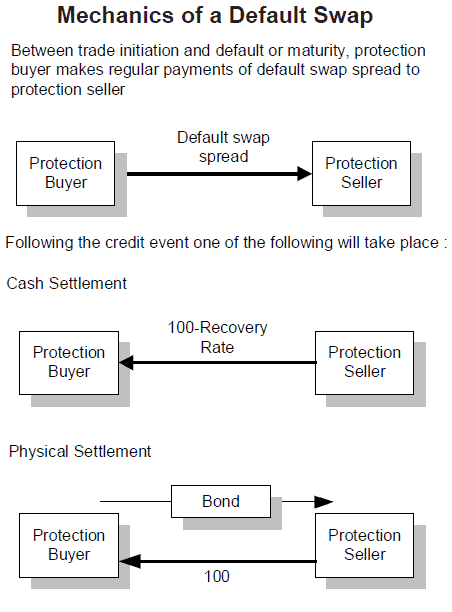 The first thing to define is the reference entity. This is typically a corporate, bank, or sovereign issuer. There can be significant difference between the legal documentation for corporate, bank, and sovereign linked default swaps.

The next step is the definition of the credit event itself. This is obviously closely linked to the choice of the reference entity and may include the following events:

These events are now defined in the recent ISDA 1999 list of Credit Derivatives Definitions, which is described in great detail in Section 6.1.

The contract must specify the payoff that is made following the credit event. Typically, this will compensate the protection buyer for the difference between par and the recovery value of the reference asset following the credit event. This payoff may be made in a physical or cash settled form, i.e. the protection buyer will usually agree to do one of the following:

Something else -   Hedge accounting

The first two choices are shown in Mechanics of a default Swap above. If the protection seller has the view that either by waiting or by entering into the work-out process with the issuer of the reference asset he may be able to receive more than the default price, he will prefer to specify physical delivery of the asset.

Unless already holding the deliverable asset, the protection buyer may prefer cash settlement in order to avoid any potential squeeze that could occur on default.

Cash settlement will also be the choice of a protection buyer who is simply using a default swap to create a synthetic short position in a credit. This choice has to be made at trade initiation.

Something else -   Defined Benefit Pension Plans